Communications from Maggie and Doug

I began my life as a child. I did not plan it this way; it just happened. At first I really didn't have many skills, so I decided to go with the flow and see what might develop.

At about 4 Earth years, my Buck Rogers coloring book had rocket ships with the coolest shapes I have ever seen. My qwest for the curvilinear had begun.

I achieved recognition for using perspective in my drawing of a Mexican hat. I was pumped.

Moved to Colfax for some formative years. Coincidentally developed a taste for absurdity. Got nearly instant feedback for a performance art piece entitled "rolling BBs under the door and into Mr. Muffly's classroom."

Hanging out with dad. He was always making charts and graphs, taking photos, making display boards of wheat root systems.

I was exposed to slide shows, a reel-to-reel Wollensak, the Polaroid Land camera, colored pencils that smelled like the Soil Conservation Service office; it was multi-media in the '50s.

At Lewis and Clark High School, as a break from the science, math, and English, I took a caligraphy course. It was a gankplank into the vessel of lettering and typography.

As a teen I was crazy for antique cars. Me and my buddies would check out magazines from the early days and study the car ads. This was before copiers and I spent hours tracing full-page car ads from the 1920s Saturday Evening Post with pen and ink and colored pencils.

I took a Summer course at the newly-built Spokane Community College in 1964. It was an intro to Commercial Art for high schoolers. We drew, painted wash drawings of products, learned some brush techniques for layouts, did a screen print and lino block print. It was an awesome overview. That program later became the Graphic Design at Spokane Falls Community College.

Off to college at Washington State University. U.S. of A. was steamrolling its way through the Cold War and I was going to be a Physics major because it sounded like a good way to stop the Commies.

Oops, along came rock and roll, the Sonics and the British Invasion. Had to let it all hang out – switched to Fine Arts. Many thanks to Francis Ho and Richard Thornton for the first-stage booster rocket ride into design. Art and graphics immersion, Viet Nam War, riots and revolution, rock band, hippies, San Francisco graphics, Whole Earth Catalog, all-night art projects with Electric Ladyland and Wheels of Fire, elephant burgers with a side order of hogs teeth.

Met BV, Bill Voiland...later to become Wild Bill. Hijinks in the dorm, graphics for the homecoming display, banana hangs on Stadium Way. Helped BV with his basement poster printing business at the House of Moose. Part time job at the Pullman Printers. The center of Pullman's commercial communications. Learned to run cool machines; copy camera, souping negs., stitcher, cutter, collating, stripping for the Davidson and the Multi. Created my first commercial job; a flyer for the campus movie, "The Knack: and how to get it".

Post-graduation, I was lingering in Pullman, protesting the Viet Nam War. Dad wrangled me a job at Lindgren-Turner Decals. I was living in a 1947 Chev sedan delivery, so I drove home in my home. Lindgren-Turner was one of the leaders in souvenir decals. When you took the family out on a road trip in the '53 Roadmaster and stopped at the Elkhorn Arch in Wyoming, you'd buy a decal to commemorate the feat. Just soak it in warm water and slide it off onto the rear window of the Buick and everyone knew you had arrived and returned. For Lindgren-Turner in 1970 it was the end of an era; art of the 30s, applied to the business model of the 50s, and sold in the 70s...it was retro but we didn't know it at the time. Doing decals was an amazing manufacturing workflow. We also did screen printing of all sorts. Bumper stickers, bus cards, jackets, felt pennants, signs, and lots of the hottest new craze...happy face stickers. I started out "racking" for the presses and cleaning screens, moved to doing setup (stripping positive film), and then to the darkroom to run the camera and make the film. Did some crazy pre-press; made separations for full-color wildlife decals by shooting black and white watercolors. Lots of experimenting; bump and flash exposures, scraping, and opaquing until we had separations for the red, blue, yellow, and black screen printing inks.

Lindgren Turner foundered and was sold to Emblem Mfg. in Los Angeles. (The salesman partner outlived the businessman partner...as the boss he'd set his own prices, sell below cost of production, pocket the commissions, and ran the business into the center of the Earth. It's the nature of a salesman?) I moved with the company to sunny LA. Helped set up the shop, got the wheels turning, saw the '72 Rolling Stones, touched the last surviving Star Trek emblem from the first series...the one off of Spock's shirt; invented Subcat; Jeff invented Reeko. Subcat and Reeko, the Cheese Gangsters, the Radio Burglars, were on the road.

Reunited with BV, printing package design comps in a garage in Anaheim. Good times squeegeeing into the night with a zillion frogs ba-zoinking in the dry river next door.

Bringing it back home

The Hometown beckoned; Spokane was going to host a World's Fair, Expo '74. BV and I began to dream of returning to create hot designs in the flurry of world-class marketing spawned by the World's Fair. Time came to migrate. November '73 found me zipping up the coast in the Cheese Craft, my two-cylinder Honda car. Bill had arrived first and rented a sliver of space behind the Goss Community web presses at Thoen Publishing; and created the legendary Wild Bill persona. I dropped by to lend some tech advice and we began to "do a thing". We invested in a sheet of plywood, a sheet of Masonite; scavenged the wood from a discarded pallet; and built a vacuum-table and a floating-bar screen. Mounted it up on an empty 50-gallon drum, and we were screen printers. We really wanted to be graphic designers, but quickly discovered that Spokanites didn't know what that was. And the powerful marketing frenzy for the World's Fair? We soon learned the local promoters believed they did not need to promote anything...sheezam! it's a gull-dern Werld's Fair...everybody will just buzz on in like yellerjackets at a weenie roast. Therefore, "sorry young artist-fellers, we don't need design." So I took a job at Lawton Printing's silkscreen shop, and BV got a job with the ad agency handling the World's Fair. There he met a hot young designer named John Smith. As the cookie crumbled, the city fathers brought in ace fair promoter, King Cole, who informed them they would find a marketing budget or face ruin and ridicule. As a consequence, there appeared a stream of posters for the weekly concerts during the Fair...created at BV's agency and subcontracted out to me and BV to print at night. So most nights we printed the first color; watched the 10:00 fireworks as the second-color screen dried; and finished up by midnight.

At the end of Expo Summer we went full-tilt-boogie as a graphic design studio. We first rented an office at Thoen's, then fixed up an old turn-of-century grocery store...we were Wild Bill Graphics. There was a business to be learned and clients to meet. Amazing times and amusing people. Living a life of Danger and Design. We bought a 1911 apartment building and became Crabtree/Voiland, Inc. We moved in the week before Mt. Saint Helens blew up.

More amazing times, printing in the basement, design on the ground floor, and a knife-murder on the third floor (not our doing!).

Twelve years in and the voltage spiked...I got responsible and went legit...joined Coons Corker Advertising and became a drawing animal for the Mad Men. I met the woman of my dreams; married, settled down and became completely sane.

Computers arrived on the planet

The TV business is uglier than most things. It is normally perceived as some kind of cruel and shallow money trench through the heart of the journalism industry, a long plastic hallway where thieves and pimps run free and good men die like dogs, for no good reason. - Hunter S. Thompson -

Hey, it was only Rock and Roll, but I liked it. Learning video; working nutty shifts, playing with the serious gear. Nine years at Q6 and a year at the kinder, gentler KREM.

Education came calling: became a teacher of graphic design at SFCC in January of 1998.

This goes on and on. Great fun and lots of great people.

In June of 2018 I retired. It was a wonderful and fulfilling ride. It was a lot of work and stress. I am settling into what feels like an endless weekend; working on home projects and hanging out. 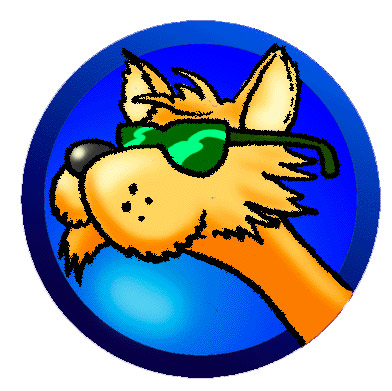 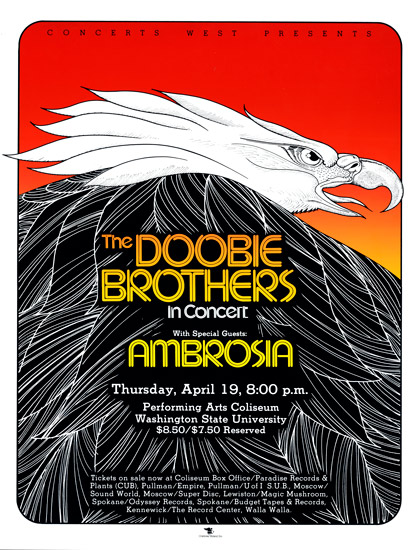 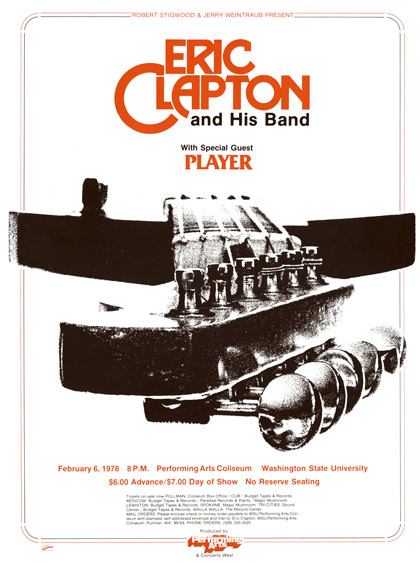 Getting political in the stupid late 70's. 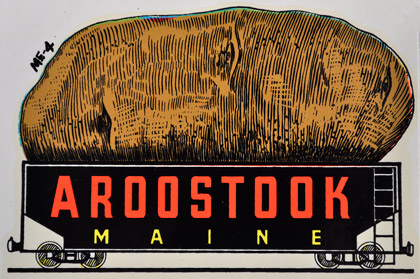 One of my last decal setups.

For the kid's coloring menu at the Onion. Cows love hamburgers!!!!

When Butch the mascot cougar passed away we proposed a switch to a mascot that really mirrored the WSU brand. 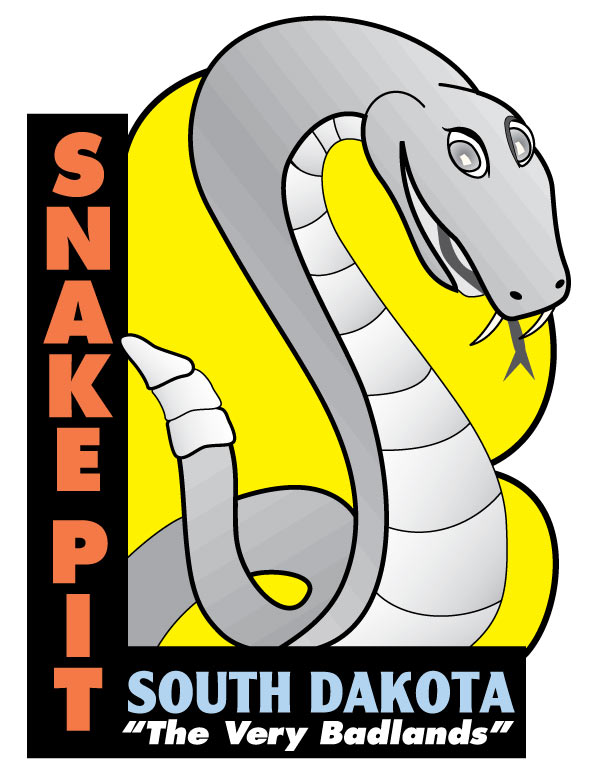 A tribute to the decal era.

A favorite logo...for a nice guy and a great craftsman.

At the CCA agency, flour+sweat=paste.